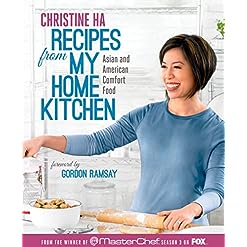 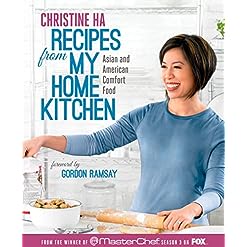 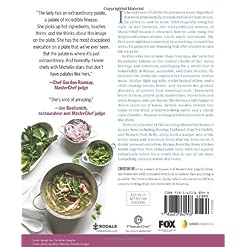 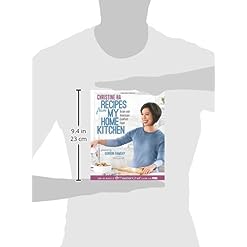 Recipes from My Home Kitchen: Asian and American Comfort Food from the Winner of MasterChef Season 3 on FOX: A Cookbook

In her kitchen, Christine Ha possesses a rare ingredient that most professionally-trained chefs never learn to use: the ability to cook by sense. After tragically losing her sight in her twenties, this remarkable home cook, who specializes in the mouthwatering, wildly popular Vietnamese comfort foods of her childhood, as well as beloved American standards that she came to love growing up in Texas, re-learned how to cook. Using her heightened senses, she turns out dishes that are remarkably delicious, accessible, luscious, and crave-worthy.

Millions of viewers tuned in to watch Christine sweep the thrilling MasterChef Season 3 finale, and here they can find more of her deftly crafted recipes. They’ll discover food that speaks to the best of both the Vietnamese diaspora and American classics, personable tips on how to re-create delicious professional recipes in a home kitchen, and an inspirational personal narrative bolstered by Ha’s background as a gifted writer. Recipes from My Home Kitchen will braid together Christine’s story with her food for a result that is one of the most compelling culinary tales of her generation. 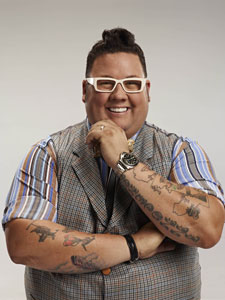 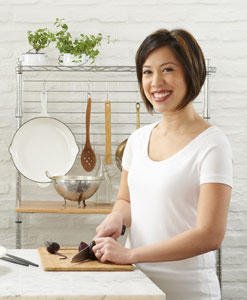 Graham Elliot: When you first auditioned for MasterChef did you ever imagine you we’d be talking about your very own cookbook a year later?

Christine Ha: Definitely not. I mean, it was my dream, yes. Out of the trophy/title, monetary winnings, and the cookbook deal, the cookbook was the prize I wanted the most. It only made sense–I am a writer, and by nature, writers want to share themselves with the world through their stories. What better way to marry the two loves of my life–food and word–than with my very own cookbook? But to compete against more than 30,000 home cooks across America? I don’t like to get my hopes up, so I tried not to give it much thought. Well, I realize now that nothing is impossible if you set your mind to it and play it smart.

GE: Gordon Ramsay, Joe Bastianich and I were always blown away by your ability to present beautiful, edible creations. How are you able to produce such visually stunning dishes without your sense of sight?

CH: Ah, that seems to be the million dollar question. Well, I’ve always had an elephant’s memory, and this was only perpetuated with my vision loss. Now that I can’t depend on my eyes to see what’s laid out on the counter, I have to memorize where I put the basil, the knife, the sauté pan full of hot oil. This memory of how foods look–shape, their color, their texture–is what aids me when I plate a dish. I think having to feel your food forces you to become more connected with it; that’s the belief of those cultures that eat their meals with their hands–touching your food with your fingers increases awareness. I also believe the fact that I can’t see the small imperfections on a plate–say, the microgreens not being set exactly 2.5 inches apart–makes for a more organic and, in my opinion, aesthetically more pleasing plate.

GE: Which aspects of your cooking style do you think will be most popular with the average American home cook?

CH: Oh, Graham, I’m smart, but I’m not psychic! Is there really such a thing as an “average American home cook”? Americans are hardly average at all. Like I said, our country is just so diverse. Plus home cooks are becoming quite sophisticated these days–just look at the range of talent you see on each season of “MasterChef.” I will say, however, that with demographics moving more and more towards dual income households, and even in the case of stay-at-home parents who are busy taking care of the kids and the house, people have less time and energy to cook dinner every night. For these reasons, I think many home cooks would appreciate recipes that are flavorful but not fussy. Actually, those are the exact parameters I have in my own kitchen when I cook a weeknight dinner. And for the weekends when there’s a little more time for leisure projects, I enjoy more elaborate experiments like pulled pork sandwiches or my mama’s eggrolls. Both types of recipes, from the easy to the intricate, can be found right here in this very cookbook.

GE: How has your approach to cooking changed over the years? How has it evolved since you won MasterChef?

CH: Like many who first start out cooking, I was very methodical. I learned by following recipes to the T–I used to think the world would end if I accidentally added one teaspoon of salt when the recipe called for three-fourths. But after cooking a dozen meals or so, I started understanding basic cooking methods and techniques. Then after another dozen meals, I began grasping flavor profiles. As with any art, once you know and understand the rules, you can break them and get away with it. Once I got to that point, I ventured off and came up with my own recipes.

Perhaps the most valuable lesson I learned during my time on “MasterChef” is to trust my gut. Food can be very subjective. I can’t stand dill or cooked salmon. But hey, if your favorite dish in the world is your grandma’s baked salmon with dill weed, I can’t argue that. I do think, however, that one should be able to back up their penchant for dill and baked salmon. “I love baked salmon and dill weed because it’s good,” to me, is not a valid argument. “I love baked salmon and dill weed because I think they complement each other in XYZ ways” is an argument I can respect even if I don’t agree. Having said this, however, I wouldn’t want everyone in the world to dislike dill and cooked salmon, because then where would their places be in our lives? I had a creamy dill sauce over a crêpe recently, and I thought it was incredibly delicious. And salmon sashimi is on my short list of favorite foods. I trust chefs who are confident in their opinions and can back them up. Diversity is what makes this world great; we should celebrate our differences.

GE: With the veritable treasure trove of recipes you now possess, which one do you feel best represents you and your life’s journey?

CH: I’d have to go with the oatmeal chocolate chip cookie. It starts out an inedible mass, but after you put some heat under it, it becomes delectably sweet–that’s been my journey in life. It’s by no means fancy, but it will always put a smile on your face–that’s me. Sinfully scrumptious. 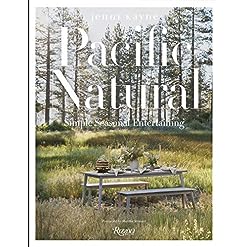 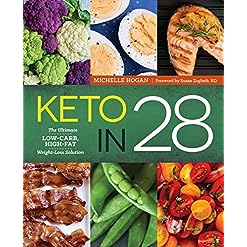 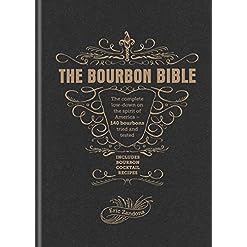 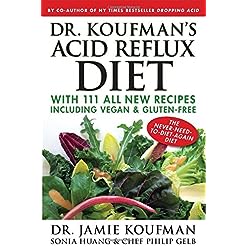